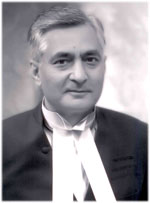 Born on 04th January, 1952. He was enrolled as a Pleader in October, 1972 and joined the Chamber of his father Late Shri D.D. Thakur, a leading Advocate and later, a Judge of High Court of J & K. He practised in Civil, Criminal, Constitutional, Taxation and Service matters in the High Court of Jammu & Kashmir. Was designated as a Senior Advocate in the year 1990.

He was appointed as a permanent Judge in September, 1995. Was transferred as a Judge of the High Court of Delhi in July 2004.