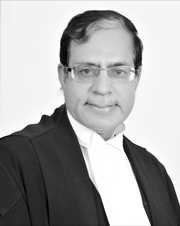 Enrolled as an Advocate in July, 1977 with Bar Council of Delhi and started practicing in Delhi. Conducted cases of all types with specialization in Constitutional cases, Labour – Service Matters and Arbitration Matters. Was counsel for numerous Public Sector Undertakings, Educational Institutions, Banks & Financial Institutions and various Private Sector Corporations. Was also part-time lecturer in Campus Law Centre, Delhi University (1984-89). Was Vice-President, Delhi High Court Bar Association during 1994-95. Was member of the Governing Body of various colleges from time to time. Designated as Senior Advocate by Delhi High Court on 30th September, 1997.

Appointed as Judge of High Court of Delhi w.e.f. 7th July, 1999. As a Judge, dealt with all kinds of jurisdictions and given many landmark judgments. Has attended/ chaired various national and international seminars and workshops and presented number of papers therein. Many articles are published in various magazines.

Elevated to the Supreme Court of India on 12th April, 2013.
Has been conferred Doctorate of Laws, Honoris Causa, by Dr. Ram Manohar Lohiya National Law University, Lucknow, in November 2013.

He holds the following positions:

Member of General Body as well as Academic Council of National Judicial Academy.

Nominated as the member of the Committee on Restatement of Law by the Hon’ble Chief Justice of India.

Member of the Governing Council of Bangalore Law University.

Member of the Directorate of Legal Studies and Law Reforms Committee set up by Bar Council of India.